A shell structure is thin in one direction and long in the other two directions. Shell structures are used in a variety of architectural and industrial applications as they are lightweight, can span large areas, and can be designed to be strong and stiff. Examples of shell structures include stadium roofs, airplane fuselages, ship hulls, automobile hoods and body panels, bridge decks, and oil tanks.

Low-order 3-node and 4-node Mixed Interpolation of Tensorial Components (MITC) shell finite elements have been used abundantly in engineering practice for many years very successfully to analyze shell structures. MITC shell elements interpolate the transverse shear strains separately from the displacements to alleviate transverse shear locking [1,2]. They perform well in all cases except for bending dominated thin shell structures meshed with elements that are highly distorted out-of-the-plane (highly warped elements). In this case, MITC shell elements do not behave optimally in membrane action, so that a fine mesh of MITC shell elements may need to be used for accurate results.

In ADINA 9.5.1, a new MITC+ formulation is available for 3-node and 4-node shell elements, referred to, respectively, as MITC3+ and MITC4+ shell elements, as shown in Figure 1.

Real engineering structures resist loads in mixed membrane/bending action. However, in this Tech Brief, we focus on tough shell benchmark problems, in which the shell structure resists loads in only membrane action or only bending action, in order to study the behavior of the shell elements in these separate actions. The behavior in combined membrane and bending actions will then be a superposition of the individual behaviors. 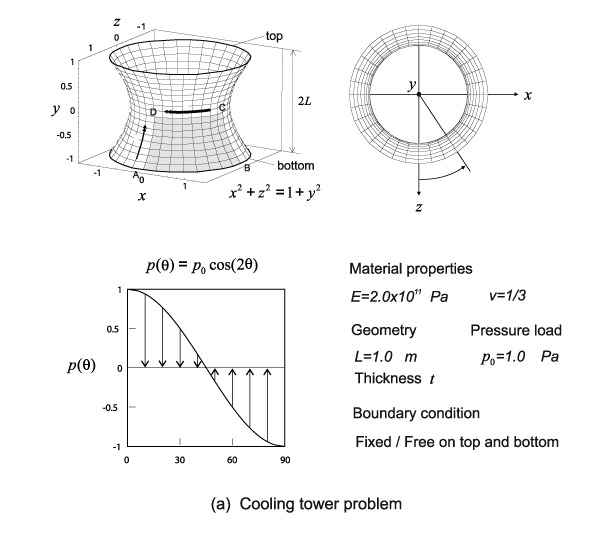 To assess the performance of shell elements, an appropriate error measure must be used. For mixed formulations, the s-norm is used [6]. The error measure,

is the strain, and

is the stress. We integrate over the 3D shell domain.

The cooling tower in Figure 2 is meshed with 4-node shell elements. Figure 2b shows the undistorted and distorted meshes used. For the distorted meshes, the sides are subdivided with ratio 1 : 2 : … : N, where N is the number of subdivisions. 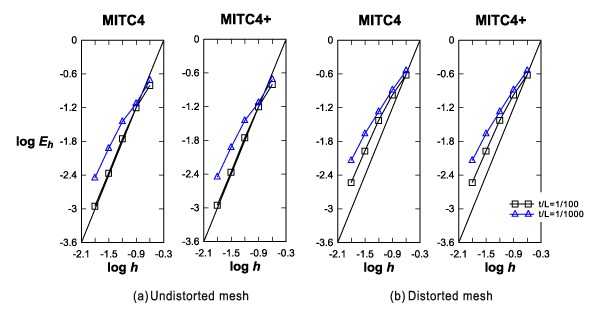 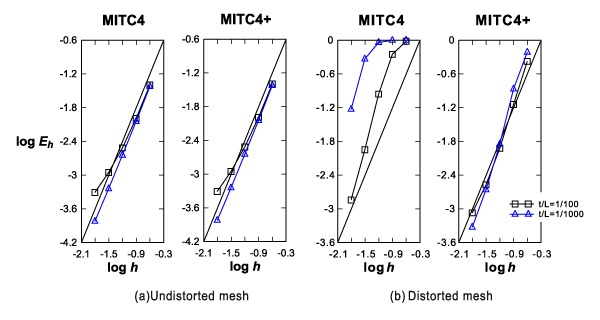 Because the new MITC+ shell elements are continuum mechanics-based elements with a strong theoretical basis, they can be directly extended to nonlinear analysis in a manner that is consistent with the principle of virtual work. 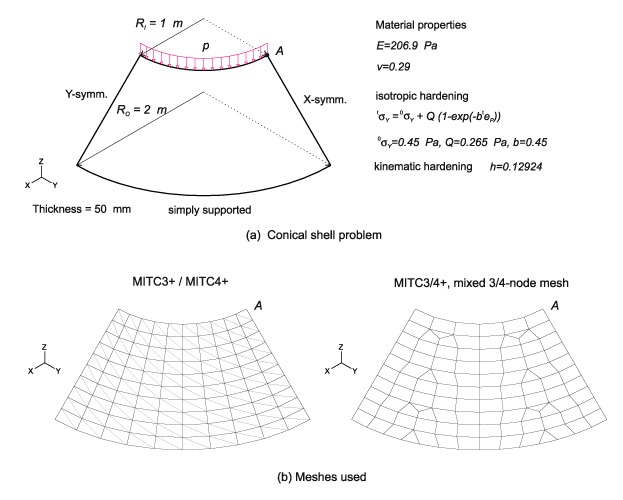 The movie above, and Figures 6 and 7 show the results. As can be seen, good results are obtained for all meshes of the new MITC+ shell elements. 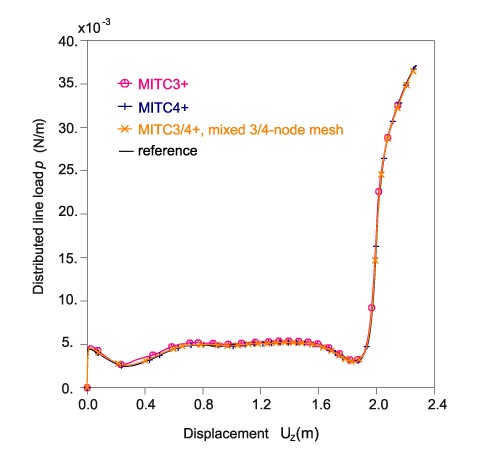 In this Tech Brief, we show that the new MITC+ shell elements in ADINA give practically optimal convergence behavior, even when the shell elements are highly distorted.

The new MITC+ shell elements in ADINA are very powerful and strengthens the ADINA offering for accurate, reliable and robust analysis of shell structures.